New bishop of the UMC in Central and Southern Europe 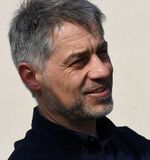 The new bishop Stefan Zürcher is 55 years old. After studying as an agronomist at ETH Zurich, he studied at the theological training center of German-speaking Methodism in Reutlingen, Germany, and then earned his doctorate at the Faculty of Theology of the University of Zurich.

From 2000 to 2015, he served as a congregational pastor in the Zurich Oberland in the Methodist parishes in Rüti, Wald and Hombrechtikon. Since 2015, he has been Superintendent of the UMC in Switzerland. His diverse involvement in the UMC in the past and presence also includes service as an army chaplain.

Stefan Zürcher is married and has four grown-up children.

He is not a strategist, Zürcher says of himself, but someone "who helps to make things possible and creates space in which people can experiment". In doing so, he likes to take unconventional paths. "Beyond that, I enjoy being a teacher and preacher of the Gospel."

Next Sunday, November 20, 2022, starting at 2 p.m., a solemn service will take place in the cathedral in Basel, during which Stefan Zürcher will be consecrated as bishop of the EMF in Central and Southern Europe. The service is open to the public. The celebration will also be broadcast live on the internet.