A venture in the name of God 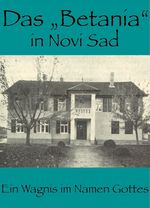 The diaconal institution "Bethanien" in Zurich (Switzerland) celebrated its 111th anniversary in the summer of 2022. In a recently published brochure about the "Betania" in Novi Sad (Serbia), Christina Cekov from North Macedonia reminds us that its blessings reach far beyond Switzerland.

In 1929, the Mission Superintendent Johannes Jacob, who was responsible for the Methodist work in Serbia at that time, wrote: "Social work is applied Christianity. Whoever thinks that today he can only preach the Gospel without also contributing to the relief of the need and misery of the people is obviously mistaken. Jesus helped everyone who came to Him and even today He wants to help in all need. Therefore, may I also ask this Conference to give greater attention to social work."

Jacob's appeal was based on the fact that at the beginning of the 20th century, the focus of the church's work rested primarily on evangelism, while social diaconal activities were of secondary priority. Only Dr. Samuel Irwin, Superintendent of the Methodist Episcopal Church in Yugoslavia from 1919 to 1924, and later also the aforementioned Superintendent Jacob, countered this trend by realizing various social diaconal projects together with other pastors and lay people.

In 1920, the Board of Foreign Missions of the Methodist Episcopal Church in Serbia purchased a building with a large plot of land. This building first served as a home for Superintendent Irwin, who in 1921, together with his wife, established a shelter for girls from disadvantaged families, the so-called "Daughters' Institute," in an adjoining building. Shortly thereafter, a school was opened where girls from all over the city could learn, for example, foreign languages, religious studies, housekeeping and nursing, in addition to the regular subjects of a normal secondary school. At the same time, they were also taught a clear Christian view of life. In 1929, however, the school had to close its doors because it had run into financial difficulties. Only the boarding school for girls who attended the city schools continued to exist.

In 1932, after the Annual Conference had decided to establish a deaconess work in the former school, the building was handed over to eight deaconesses, who continued to run the girls' boarding school, which still existed. Sr. Luise Simon, who had trained as a nurse at the Bethanien Deaconess House in Zurich some time before, was in charge of the sisterhood. In 1934, she and the superintendent of the time were commissioned by the Annual Conference to convert the building into a sanatorium. Upon request, the Bethanienverein in Zurich decided to take over the work and to finance the conversion. In the annual report of 1935 it said: "Mission work in Yugoslavia has been put on the heart of our church. We offered a hand in converting the former institute building into a small, attractive sanatorium with 15 hospital beds for the sisters, most of whom trained with us."

The conversion took half a year and was considerably more expensive than originally thought. Nevertheless, in November 1935, the inauguration of the sanatorium could be celebrated, where from then on a neurologist and a specialist for internal medicine took care of the patients as leading physicians. Sr. Huldy Lerch, who was sent to Yugoslavia by the Diakonissenwerk Bethanien in Zurich, wrote in connection with the inauguration: "It was a 'venture in the name of God'. Bethanien we called our house - a place where Jesus loved to stay."

Within a very short time, the sanatorium, where poor people as well as pastors and their families could be treated for free, acquired an excellent reputation. As a result, only a few years after its inauguration, an additional surgical department was opened.

In addition to the sanatorium, the deaconesses also maintained a small old people's home for elderly women, which was moved to the pastor's house of the Methodist Church in Vrbas and later to Kisač in 1944 due to the bombing of Novi Sad. In addition, the deaconesses also worked in an orphanage in Srbobran, they helped with preaching and office work and thus became a great support of the Methodist Church in Yugoslavia.

After the beginning of the Second World War, work in the "Betania" could initially continue almost as usual. Only in October 1944, when the area on which the sanatorium stood fell back to Yugoslavia, changes occurred. In December 1944, the building was taken over by the Yugoslav Army, which established a department for people suffering from tuberculosis. The only two sisters who had not fled abroad by that time had to do unpaid work there for several years. In 1948, a law on expropriation of private economic enterprises was modified in such a way that the former "Betania" inclusive property became the property of Yugoslavia. Due to a compensation payment of 6000 USD in 1972 to the Board of Foreign Missions, there was later no legal possibility to get back the building and the land within the restitution. Until 1960, the former "Betania" remained an institution for people with tuberculosis and lung diseases, after which the old building was demolished and a gynecological clinic was built on the same site, whose current name is "Betanija".

Christina Cekov writes in the conclusion of her brochure: "The small, modest godchild of the great Bethanien in Zurich has left traces of blessing that can be felt to this day. We are grateful that the 'Betania' in Novi Sad existed. We are thankful for the impressive work of the deaconesses and we are thankful for the big Bethanien in Switzerland", which "made the small 'Betania' possible in the first place."

Those interested can order the German language brochure, whose publication was financed by Diakonie Bethanien, free of charge from the bishop's office in Zurich (urs.schweizer@umc-cse.org, +41-44-299 30 60).