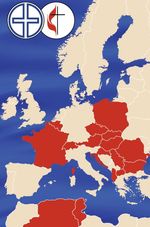 On the occasion of the 60th anniversary of the Central Conference of Central and Southern Europe, 60 local churches participated in encounters aiming to strengthen the connection across national, linguistic and cultural borders.

In October 1954, the Central Conference of Central and Southern Europe (CC CSE) was established in Brussels (Belgium). When the members of the Executive Committee of the Central Conference met in March 2014 in Sofia (Bulgaria), they agreed on not celebrating this anniversary with a historical publication. Rather then, it was the wish to make it possible for as many people in the local churches as possible to experience the richness of this diverse Central Conference in a very practical way.

The October issue of the magazine «Kirche + Welt» («Church + World») included, among others, some historical and statistical background information as well as concrete examples how the connection within the CC CSE can be experienced. Part of this magazine was translated and published in other countries, as well, for instance as part of the magazine «En Route» in France.

For the church encounters, which took place on October 19, 2014, exactly 60 local churches from Albania, Austria, Bulgaria, Switzerland, the Czech Republic, Algeria, France, Hungary, Macedonia, Poland, Serbia, and Slovakia had registered. Having been arranged in pairs, they could directly communicate with their «partner church» to agree on the details of their respective «encounter».

Many local churches exchanged powerpoint presentations with photos as well as information, and they also shared prayer concerns so that they could pray for one another. Culinary and other gifts found their way from here to there, too. On the previous Sunday, the local church in Tirana (Albania) had recorded a video , which was sent to the Bethesda church in Basel (Switzerland). Some pastors agreed on preparing their sermon for their respective «partner church». As a result Dragan Trajcevski from Novi Sad Serbia) «preached» in Biel (Switzerland), while Théo Paka from St. Imier (Switzerland) «addressed» the Maranatha church in Pilzen (Czech Republic). Thanks to reliable internet connections there even were electronic encounters – the local churches in Bratislava (Slovakia) and Kisač (Serbia) for instance could see each other and talk to each other in real time. There were even some physical visits: Pavel Procházka from Bratislava as well as other guests from Slovakia made use of a preparation meeting for a Serbian-Slovakian Youth Camp taking place next year to contribute the sermon and touching music to the worship service in Kisač (Serbia). And a group of 5 people from Padina (Serbia) spent the whole weekend in Murtino (Macedonia).

Communication prior to these «encounters» was sometimes quite difficult. But the feedbacks after this special experience were positive. Two examples: «It was a good and needed experience for our church.» (Filip Jandovsky, Pilzen) And: «In our church, we had the privilege to experience a bit of our Central Conference in a very practical way: people from different countries and cultures, thinking differently and having different ways to express themselves, complement and enrich each other in their faith and life.» (Rigels Kasmollari, Tirana)

A third part of the anniversary will be a brochure with Advent meditations. These meditations, prepared by men and women from the countries of the Central Conference, will be an opportunity to be on a joint journey of sharing faith from November 30, 2014, to January 6, 2015. These meditations will be published in German and English, but will also – fully or in extract – translated into other languages of the Central Conference.