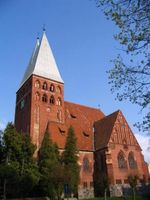 The 88th session of the Annual Conference in Poland took place from June 19 to 21, 2009 in Ostroda. The theme of the Conference was «Seek God and you will live».

The members of Ostroda UMC hosted the Annual Conference because of the fact that their big church building, in which about 2500 people can be seated, was built in 1909 – i.e. 100 years ago – by Lutheran and Reformed Christians. After World War II it was handed over to the Methodists – similarly to the church buildings of some other abandoned congregations in the area. Ecumenical and political guests participated in a special celebration during the Annual Conference meeting.

As one of the officially recognized Churches in Poland, the UMC has still the possibility to produce several radio and television broadcasts annually – with a focus on worship services, important representatives of the Church or particular themes like «Catholic Spirit». Although the broadcasts have been shifted to not so popular times in the morning on weekdays, they are still a great opportunity to reach out to many unknown people in Poland – and because of this work new people find their way to the local churches again and again.

In the closing worship service one pastor was ordained deacon (which, in Poland, is still the «first ordination» before being ordained elder). For the first time after many years a woman applied for the ordained ministry. The Annual Conference 2010 will decide on this application.