The UMC in Romania grows 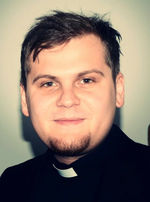 When the United Methodist Church was officially established in Romania in 2011, it consisted of two communities in Cluj and Micesti. However, the vision was to found other local churches. In Sibiu, this step can be done soon.

It was in June 2013, when Cristian Istrate moved to Sibiu to establish a church there. He invested a lot of time in personal conversations about issues of life and faith. He also organized - supported by Methodists from Cluj and Christians from other churches - several evangelistic events.

In January 2014 he was able to found a weekly Bible study group, which developed positively - the participants grew not only in terms of their personal faith, but the group also grew numerically. Soon there was an average of 12 participants.

It was never the aim of UMC in Romania to establish itself as a church by distinguishing it from other denominations, but in the commitment for seeking people. Therefore Cristian Istrate also established an official contact to the Evangelical Lutheran Church, and he participates – together with Orthodox priests, Lutherans and people of other Christian churches – in monthly ecumenical meetings.

In 2014 Cristian Istrate got in touch with a young man who had – after an exceptionally difficult childhood – committed his life to Jesus Christ, and who had subsequently established a ministry with teenagers in difficult life situations. There are more than 100 young people with whom the man is regularly in touch. As a result of discussions with Cristian Istrate, the young man, who is also very gifted in music, decided to join the UMC. This opened up a completely new dimension for the church planting project in Sibiu.

In September 2014, the participants of the Bible study group spent some days in a retreat; one week later the first official church service was celebrated a. In October 2014, a newly formed women's group met for the first time, and in the same month the first Holy Communion was celebrated in a Sunday worship service.

On Sunday, November 23, 2014, the local church in Sibiu will be officially established. Additionally, there is reasonable hope that a fourth local church in Romania will be established soon. This church will be located in a village near Cluj, in which most of the inhabitants are Roma.