Visit the website of the Reformed Church in Tunisia (fr)

The UMC in North Africa 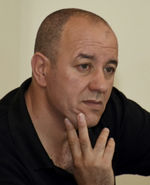 The work of Methodism in North Africa was started towards the end of the 19th century. Initially, there were only a few restrictions on church work in Algeria. The Methodist Church owned church buildings, children's homes and clinics. But when the country became independent in 1962, the situation markedly changed. First, many local Christians left the country by their own choice. Later many Methodist missionaries were expelled from the country, children's homes and boarding schools were forced to close, and Church property was nationalized.

In 1972, the Methodist Church fused other Protestant denominations to form the Protestant Church of Algeria, and the work was organized as a district of the Annual Conference Switzerland-France-North Africa.

Today this district also includes the Methodist presence in Tunis with its emphasis on social services (assistance for students and immigrants from sub-Saharan Africa), and on a joint service with the Reformed Church.

The Christian Church is a tiny minority in North Africa. But encouraged by new awakenings – for instance in the nineties in Kabylia – and against all odds, the Methodists faithfully press on. There are worship services, Bible studies, weddings and baptisms. And the Gospel is not only proclaimed but also put into action, which leads to the fact that over and over people are expressing their interest in the Christian faith.