We are on a good path 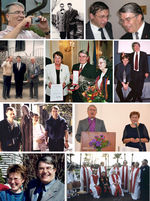 On Thursday, May 13, 2021, retired Bishop Heinrich Bolleter will celebrate his 80th birthday. He concluded many an exchange of views at conferences in his home country and abroad with the words "We are on a good path!" – and perhaps precisely in this way made it clear time and again that faith and trust are not a possession, but a process.

Born in Zurich on May 13, 1941, Heinrich Bolleter grew up in a Methodist family. It was therefore not so surprising that his path led him into the “Jungschar” (scouts) and the “Jugendbund” (youth group) – and it was precisely this time that was to prove formative for his faith and for his later vocation to the ministry as a pastor. After completing his school education up to the Matura with a special diploma in mathematics and physics, he toyed with the idea of becoming a forest engineer and emigrating to Alaska. But then he decided to study theology at the church's own seminary in Frankfurt am Main (Germany). In 1965, at just 24 years of age, he received his first appointment to Baden. In 1969 he was ordained as an elder of the UMC. In the following 20 years he worked in the UMC churches in Baden, Zurich-Wipkingen, Thalwil and Zofingen. In addition, he was also responsible for editing and publishing the magazine “Kirche + Welt” (“Church + World”»from 1974 to 1985.

In 1989, the delegates of the Central Conference of Central and Southern Europe elected him as new bishop of this area, following Bishop Franz Schäfer. Only a few months after having taken up his ministry, there was a political change in eastern Central Europe and the Balkans. This also led to a reorientation and reconstruction of the UMC in the various countries of this area. In a rich diversity of faith biographies, languages and cultures, Bishop Heinrich Bolleter built numerous bridges with his characteristic humanity and kindness and remained on the road with the women and men of his church – and beyond. He experienced how God gave strength in difficult times and opened up new perspectives, and how life blossomed and bore fruit in many places.

After having been awarded the Grand Decoration of Honor in Silver with Star of the Republic of Austria in 2006 for his bridge-building services between East and West, he strove from 2007 – one year after his retirement – as Geneva secretary of the World Methodist Council for a credible, common witness of the churches on a worldwide level. Bishop Heinrich Bolleter has not lost his keen interest in global contexts and his open heart for people of the Central Conference of Central and Southern Europe and beyond. It is true that his radius of movement has become smaller - but today he is all the more committed to working with and for people who have immigrated to Switzerland from other cultures, for example, Arabic-speaking people.

Bishop Heinrich Bolleter has not gone his way alone. For 55 years he has been married to his wife Marta, who has supported, accompanied and complemented him in his tasks, and who has added her own color, especially when being together with other women of the Central Conference of Central and Southern Europe.

May Bishop Heinrich Bolleter and his wife Marta, together with their three children and their families, experience again and again on their way into the future that the way they are walking is “a good way” – because the Risen Lord goes ahead, is close to them, strengthens their hope and fills their hearts with peace.

Part 2 with a collection of a few birthday greetings can be found HERE.