Stewards of the Good News 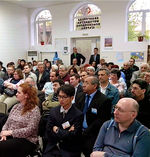 About 50 people participated in the 2013 session of the Provisional Annual Conference Bulgaria-Romania taking place from April 12-14, 2013, in Lyaskovets.

A first emphasis was put on the report of Superintendent Daniel Topalski. At the end of his second year serving as Superintendent, he offered an analysis of the spiritual and theological situation of the UMC in Bulgaria. In a paragraph on the identity of the Church he emphasized that many things had happened in the past 20 years. Congregations had been revived or newly established. Church buildings and sanctuaries had been newly established or renovated. Books had been translated, and theological education for both pastors and lay had been reorganized. He thanked all those who committed themselves in this regard. Unfortunately the Church has not yet managed to overcome an identity crisis. Topalski underlined the importance of not only looking back to the pre-1944 history (i.e. the time prior to the Communist regime) but to mainly focus on the foundations of Methodism. He called for a re-discovery of the «means of grace» and the «General Rules» and particularly for establishing and accompanying small groups with sensitivity and persistence. In addition the leaders should empower the church members to share their faith in their daily lives. Topalski also referred to the unique situation of the UMC in Romania: being less than two years old, the Church has an opportunity to consciously laying a Methodist foundation from the very beginning.

In a second paragraph Topalski underlined the importance of being a Church in dialogue. There are good relations with the Bulgarian-Orthodox Church and the Roman-Catholic Church. Future pastors of the UMC in Bulgaria even study at the Orthodox Theological Faculty of Sofia University. The dialogue within the Union of Evangelical Churches, however, remains problematic for various reasons.

Topalski finally pointed to the fact that the majority of church members cannot boast of being with high social standing but rather suffers from the bad economic situation of the country. However, the poorest congregations – particularly the Turkish-speaking and the Roma congregations – are the ones, which are growing the most. These congregations are the only stable communities and institutions providing opportunities for meeting with God, caring for the needy and facing the typical problems of this population (poverty, illiteracy, drug abuse, prostitution, women trafficking, etc.).

In the report of the Church Council it was stated with thankfulness that – in spite of the desperate economic situation of the country – local giving increased by 15% in 2012.

The statistics revealed a growth in church membership: there are now 33 local churches with 1266 professing members (+148), about 500 children and about 500 friends.

The work in Romania is developing well. Cristian Istrate was commissioned with strengthening the beginnings of a new congregation in Sibiu – the third congregation of the UMC in Romania. The prison ministry in Varna, Lovech and Radzelna (all cities in Bulgaria) bears good fruit, as well. It could, however, be expanded if more financial means would be available (e.g. for the organization of faith-sharing/discipleship courses).

During an evening celebration a local pastor of a small Turkish-speaking church and the pastor of Lyaskovets UMC shared glimpses of God’s presence in their ministries. Lyaskovets UMC is committed to serve Roma children. Last year they could open a house with a small sanctuary and various rooms to serve children from kindergarten to the end of the mandatory schooldays. 32 children who regularly participate in the various programs are offered pre-school activities, supporting measures, computer classes, music classes, etc. The children also have an opportunity to cultivate a piece of land in the garden. It is a special joy for the leaders that some children not belonging to the Roma ethnicity participate in the programs, as well. They already learn in their childhood that a peaceful coexistence is possible where the love of God is put into action.