Visit the website of the UMC in Austria (de)

The UMC in Austria

Methodist work in Austria was begun in Vienna in 1870. Initially, the Methodists had the right to a «familial practice of religion» only. But when they were granted more freedom in 1920, they soon established several new congregations and a children’s home. The worship services and Sunday Schools were full. But soon, a very painful era dawned. In 1945, the Methodist Church in Austria had to be reorganized. In spite of their own distress, the Methodists helped countless refugees, which had come into the country. As a result of this service, new congregations were formed in refugee camps. In 1951, the Methodist Church was recognized by the Austrian state. Today, openness toward seekers of all generations and countries are typical characteristics of the Church. Because of this, in practically all congregations, people from many different nations gather, and worship services are sometimes translated into several languages. In Vienna, there is also a lively English-speaking church that was founded in 1978. As a result of this basic openness, new people find a spiritual home in the UMC again and again. Although small in number, it plays an important role in the ecumenical movement. And finally, the widely known and respected «Zentrum Spattstrasse» in Linz provides innovative and important social and pedagogical services for children and youth from all over Austria.

Celebrating the love of God

From May 26-29, 2022, the 93rd session of Austria Provisional Annual Conference took place in Salzburg. 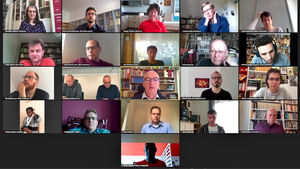 The Annual Conference meeting in Austria had to be postponed in May – as in all other countries of Central and Southern Europe. Nevertheless, there are interesting things to report about how the Methodists are doing in Austria in the current situation. An online study day on October 10, 2020, provided an opportunity for joint discussion.

The former Secretary of the Central Conference of Central and Southern Europe passed away at the age of 68 after a long illness.