The Church in the Contemporary World – Annual Conference Bulgaria-Romania 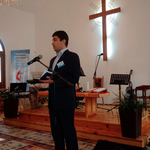 The meeting made obvious that the relationships between the members from Romania (where there are currently three local churches) and from Bulgaria further deepened. The encounters and conversations were thus marked by a joyful openness and friendship. Since all Romanian members and the guests from abroad were English-speaking, the whole Conference was bi-lingual (Bulgarian/English), and the reports were available in both languages, as well.

In his report, Superintendent Daniel Topalski expressed his gratefulness for the tremendous financial support, which the UMC in Bulgaria had received from abroad since the end of the communist era. However, he also emphasized that it would be important for the future of the church to increasingly speak both about mission and money and to encourage the people of the UMC in Bulgaria to a stronger financial commitment than in the past.

Furthermore Daniel Topalski identified the problem that the local churches would often lack a clear vision. It would not be sufficient if the church was visible as a building only. «We should accept church as a verb rather than a noun.» This would help to make church (not the building!) perceptible, and it would offer an opportunity to enter in a dialogue with people from outside the church and to establish relationships.

A third point referred to (continuing) education of pastors, which is still a priority. Last year a Local Pastors Study Course was started in Cluj (Romania) right after the same course for Bulgarian Local Pastors had been completed.

Üllas Tankler shared some very interesting and inspiring thoughts on «Church in a Modern World» with the members and guests of the conference. To witness Christ would often be an interaction of three factors: to be present, to be active and to confess one’s faith. However, these factors can be given more or less weight depending on the respective situation. Questions, which are worth considering, are: Which people visit our churches? What gifts and talents do they bring with them? How could we help them to find a place among us and to further develop?

In the sense of a good Methodist tradition both the reports and the mutual sharing during the breaks and meals were equally important and encouraging. The evening presentations of both countries were not only informative, but also very entertaining and, from a musical point of view, on a high level.

The next Annual Conference meeting will take place from March 31 to April 3, 2016; the venue has not yet been determined.