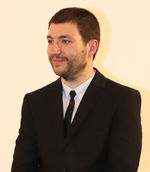 During the most recent meeting of Serbia-Macedonia Provisional Annual Conference, which took place from April 12 to 15, 2018, in Kisač(Serbia), an important changeover was celebrated: Rev. Daniel Sjanta was appointed as the new superintendent of The United Methodist Church in the Serbian District. He follows Rev. Ana Palik-Kunčak in this leadership position.

For 15 years, Rev. Ana Palik-Kunčak has been leading witness and service of the UMC in Serbia. It was an extraordinary decision for a country on the Balkans when Bishop Heinrich Bolleter appointed a woman to such a leadership position in 2003. However, there had been a period in the past, i.e. the time after the Second World War, in which the church could only survive thanks to the strong leadership of women.

During all these 15 years, Rev. Ana Palik-Kunčak did not only serve as superintendent but also has led the largest congregation in the District. She has accomplished both tasks very calmly and faithfully. Over the course of these years she has accompanied a younger generation entering the pastoral ministry of the Church. But she also had to experience – and sometimes to take painful decisions in this regard – that the Church can only support and further develop those who are willing to agree with its spiritual principles and polity, and that in some cases the Church had to part with candidates for ordained ministry.

On the closing Sunday, Rev. Daniel Sjanta was appointed as the new superintendent of the UMC in Serbia. He is part of the younger clergy generation. In addition to his new leadership position, he will also continue to serve a local church. It is an encouraging sign for the UMC in Serbia that there are people of a younger generation who do not emigrate but who stay in the country and serve the Church. However, the statistics nevertheless show that the Church is affected by a general development in society, as well: many people leave Serbia in order to find a job in a neighboring country of the European Union and make a better living there. This is also true for Macedonia.

It continues to be a great prayer concern for both Serbia and Macedonia that more people are called into the ordained ministry and that they are willing to contribute their God-given gifts and talents for joining in God’s mission and building up the Church. Several pastors said: «I have the most wonderful profession I could imagine» – and they said this in spite of many difficulties in the everyday life. But they consider themselves as workers in the kingdom of God and experience that they can impact the lives of other people in a meaningful way.

Thanks to the financial support of Connexio, the network for Mission and Diaconia of the UMC Switzerland-France, the pastors salaries could be raised in 2018 – for the first time after many years. This gift was very gratefully received. It was, however, a joyful and encouraging reality that the local funding has increased, as well – in spite of the most difficult economic circumstances.

The Annual Conference members also took some decisions on the further development of the presence of the UMC in Albania. A separate report on these decisions will follow.

The next gathering of Serbia-Macedonia Provisional Annual Conference will take place from April 11 to 14, 2019, in Macedonia. The place will still have to be decided upon.