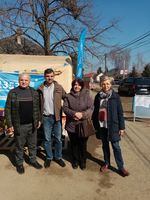 The war in Ukraine is driving more and more people to flee. People of the United Methodist Church are helping. This is also possible thanks to donations from the church's worldwide network. A look at Bulgaria, Hungary, Poland, and Romania.

The number of people fleeing Ukraine is increasing. According to the UNHCR, more than 3 million people have now fled the country. Nearly 1.9 million refugees have arrived in Poland alone. Nearly 500,000 refugees fled to Romania.

United Methodist churches can also be found in many countries in the region. From the beginning, they have provided assistance in cooperation with other churches and governmental and non-governmental organizations. In the meantime, work has also been done in the background to better coordinate and distribute aid offers, donations and relief supplies. Coordinators have been recruited or appointed in Poland, Czech Republic, Slovakia, Romania and Hungary. In Bulgaria, this task is carried out by the office of the local Methodist superintendent.

Many people from Ukraine were already living in Bulgaria before the outbreak of the war. Therefore, the first Ukrainian refugees who came to Bulgaria turned to their relatives and friends. "In recent days, however, a growing number of women and children without any relations have also arrived in Bulgaria," Urs Schweizer, assistant to Bishop Patrick Streiff, writes in a report on the current situation in each country. Methodist congregations in Sevlievo, Shumen, Varna and Veliko Tarnovo have meanwhile taken in Ukrainian refugees. In addition, individuals from the UMC in Bulgaria have also traveled to the Ukrainian-Romanian border to help refugees stuck there. "The UMC has been asked to organize a daily transport for Ukrainian refugees from the Ukrainian-Romanian border to Varna," said Superintendent Daniel Topalski in Varna. In Varna, the local United Methodist church is also working to prepare a former kindergarten so that it can be used as a shelter or day center for Ukrainian children. Those responsible are working closely with local authorities to implement the project.

Men and women of the UMC in Hungary are also helping refugees, including directly on the Hungarian-Ukrainian border. Here an ecumenical "Emergency Support Point" has been set up, which is also supported by the UMC in Hungary. In addition, Hungarian Methodists are also in direct, personal contact with Methodists in western Ukraine.

In terms of numbers, the UMC in Romania is small. Nevertheless, it has an enormous impact in this crisis situation. "Because of the cooperation with other churches and non-governmental organizations in Sibiu and Cluj-Napoca, a comparatively large number of people are involved in the various activities," writes Urs Schweizer. In order to better meet the needs of the refugees, those responsible in Cluj-Napoca have integrated a psychologist and a lawyer into their team. The two women come from Ukraine themselves. Many of the refugees are only passing through. Those refugees who cannot go elsewhere because they do not know anyone, or who prefer to stay near Ukraine in order to return as soon as possible, are accommodated in families. Since many of the refugees are women and children without their husbands or fathers, the authorities attach great importance to visiting each person who takes in refugees. In addition, the hosts and the refugees housed with them must sign a contract drawn up by a lawyer.

In Poland, too, several local United Methodist churches have taken in Ukrainian refugees. Many of them travel on after a short stay. In addition to a safe place, they also receive medicine, clothing and hygiene products. "Given the limited number of people who can help, it is better to buy what is needed locally than to receive shipments of materials from the West," Schweizer writes in his report. After all, such relief supplies would have to be stored, sorted and managed.

In all these countries, the UMC is small in number. Nevertheless, the world would be a little colder if it were not for the love of men and women of this church who - with the support of the worldwide church family - are active in very different forms of concrete help.