Witness of a miracle 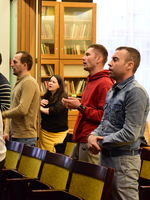 There are many Ukrainians and Russians living in Prague. Some Russians support the war, others do not. And even though the Czech Republic does not directly border Ukraine: The conflict is not far away - it is only a ten-hour drive to the Ukrainian border.

While a destructive war rages in Ukraine, the emotions between Ukrainians and Russians are also evident in the Czech Republic. In restaurants, grocery stores and even on the streets of Prague, for example. But there is also a place of peace in the Czech capital - for both Ukrainians and Russians: the Russian-speaking UMC congregation. Agape UMC. People of both nationalities, plus Belarusians and Kazakhs, gather each Sunday afternoon at 4 p.m. to worship God.

Ray Wilck, a retired missionary from the United States, recently attended one of the services at this church. "My first impression was how similar United Methodist services are in any language and culture. I was able to follow in English the church service. The son of the Russian pastor, Lev Shults, translated. The scripture readings and the sermon were in Russian. The prayers were in Ukrainian, and the praise songs were in both languages." For Wilck, however, it wasn't just a regular church service. Rather, he experienced something that touched him deeply.

"In his sermon, Pastor Lev was careful – very careful – not to favor any political point of view. His is a Godly message, not one of politics," Wilck said. And it was a message inextricably linked to the current situation. "He says he wakes up during the night after experiencing a nightmare – and realizes that this nightmare is reality." Pastor Lev Shults referred to the congregation's relief activities and spoke with great respect of the courage of those men who, supported by the Czech Methodist churches, travel weekly to the Ukrainian border with a truck full of desperately needed humanitarian supplies. With non-perishable foodstuffs such as canned meat, for example. With hygiene items like soap and toilet paper. Or with medicines. The supplies are then taken over at the border and distributed to people in need in Ukraine.

In Sumy, for example, a town in the northeastern part of Ukraine. Numerous people have already fled from there to the west of Ukraine, to Poland, and to the Czech Republic. Others are staying. A few days after Wilck's visit to the Russian-speaking UMC in Prague, Pastor Lev Shults received a message from a friend in Sumy. The city had been bombed during the night. Again. A bomb fell next to the house of a deacon. The blast wave of the explosion threw a window across the room, just above the heads of the deacon and his wife. Had the two not knelt in prayer, but instead stood, the window would not have shattered against the opposite wall, but it would have deadly hit the couple…

" Pastor Lev delivered a short sermon," Wilck continued. "The key word was 'peace'. Peace for Ukrainians, Russians, Czechs, Americans and all of God's children." Pastor Lev, Wilck said, spoke of Jesus and loving one another as we love ourselves. "His prayer was basic and simple. We need to open our hearts to one other in peace." In open prayers, he added, the congregation prayed for common understanding among all peoples and nations.

After the service, Wilck was able to speak briefly with Pastor Lev Shults. "I asked him how he would sum up his message. He paused and then said: 'Peace unites people. War separates them. We pray in Jesus' name.'"

Ray Wilck was about to attend a church service on a Sunday afternoon - and he witnessed a miracle.