Between cabbage and cucumbers – Annual Conference in Monospitovo (MK) 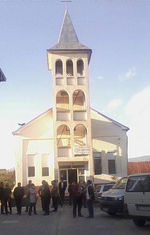 For the first time after 26 years, the meeting of the Provisional Annual Conference Serbia-Macedonia took place in Monospitovo, a farm town in the Strumica Valley. It was a joyful celebration for the local congregation of the UMC, and even the mayor was present in the opening worship service.

There are several United Methodist congregations in the Strumica Valley, which is one of the most fertile agricultural areas of Macedonia. Most of the people living there are farmers, and even young people return to their parental home after their studies because of the fact that they cannot find an employment. On the other hand, the salaries in Macedonia are so low that some international companies use this location to manufacture less expensive.

Two years ago, the only ordained elder in Macedonia below retirement age was appointed to Monospitovo UMC. Since then many things happened. The local church contributed – both by voluntary work and by donations – towards a renovation of the parsonage and an extension of some church rooms. One week prior to the Annual Conference the courtyard was paved so that it could be used for car parking and for coffee breaks. While a few days ago many cultivated areas had once again been flooded by heavy rains, the sun was shining throughout the whole conference from April 17 to 19, 2015, which brought warmth into the chilled houses.

There was another reason to celebrate in Monospitovo: Last fall a young man started his internship at this congregation – after many years he was the first young person undertaking this «journey». He will most probably start his theological studies in fall 2015. At the same time a second intern will follow. But also in regard to voluntary work, young people are increasingly willing to take over responsibility. These are encouraging signs of spring in the UMC in Macedonia: a new generation of leaders is starting to grow up.

The Annual Conference covers both Macedonia and Serbia, and the reports often referred to a renewed cooperation of the two districts. In the conversations during the conference the mutual appreciation also became visible. The young people particularly look forward to the joint youth camp in summer 2015 (with participants from Albania, Bulgaria, Macedonia, and Serbia). Two delegates from Albania reported about the latest developments of the churches in Bishnica, Elbasan, Pogradec, and Tirana.

The next meeting of the Annual Conference will take place from April 7 to 10, 2016, in Padina (Serbia). The elected delegates to General Conference 2016 are Emil Zaev (president of the church council in Macedonia, lay) and Daniel Sjanta (pastor in Kovačica, Serbia).