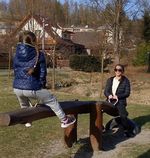 The UMC in Poland, Czechia, Hungary, Romania and Slovakia is helping refugees on both sides of the border. As this help is continuing, both opportunities and challenges are emerging.

Individuals and United Methodist congregations in countries directly or indirectly bordering Ukraine are still opening their doors to refugees seeking shelter - either for just a few nights or with a longer-term perspective.

For those who stay longer, helpful solutions are sought. In Romania, for example, eleven people from Ukraine are living in an Orthodox monastery through the mediation of the UMC. Some women and children have meanwhile moved into a house rented by the UMC in the city of Cluj-Napoca, where they can live together. In Czechia, wherever possible, the UMC is helping refugees to move from long-term accommodation into rented apartments and to stand on their own feet.

Finding housing, however, is only one important task. It is equally significant to help refugees find jobs. Since in many cases mothers cross the border alone while husbands and fathers remain in Ukraine to defend their country, a daycare center for children of mothers who have found work is crucial, stresses Libuse Hajciarova of the Jihlava UMC (Czechia). According to her, this opens up new opportunities for local churches to help refugees in a meaningful way.

In addition to the work with refugees in the respective countries, the numerous aid transports to Ukraine continue to be of great importance. According to Luca Birtalan, coordinator of Methodist work with Ukrainian refugees in Hungary, the population in Transcarpathia (in the far west of Ukraine) has grown by 30% since the beginning of the war. The need among the internally displaced is great. The relief shipments that Methodist helpers in Poland, Czechia, Hungary, Slovakia and Romania, are organizing, among others, to this area seek to meet this need.

Those responsible for the transports try to not simply transport what they have and can no longer use, or what they may have received as donations in kind. Rather, they try to send what the recipients in Ukraine ask them to send, thus truly meeting the needs of people living in very difficult circumstances.

Rares Calugar, superintendent of the UMC in Romania, reports that so far 14 deliveries have been organized from his country to various places in Ukraine. Goods with a total value of over CHF 100,000 have been passed on in this way. Some aid supplies have been taken to their destination. Others were picked up by people from Ukraine at agreed meeting points and then transported on to their destinations.

Very helpful for this work is the good network of United Methodist churches in the various countries. Within a radius of less than 100 km there are several of them in Slovakia, Hungary and Ukraine.

More and more of the refugees are attending events organized by local churches in their host countries, according to Jana Krizova, coordinator of Methodist work with refugees in Czechia. "These people are increasingly looking for fellowship," she says. Sarah Putman, U.S. staff member in Romania, has a similar view: "The UMC can offer a more holistic care than other NGOs do and minister to the spiritual needs of ^people."

The Ukrainian "guests" are grateful for what they receive. But the pain of the devastating consequences of the war often surfaces quite abruptly in their daily lives. " Despite the fact that they like it here, when they look at the landscape in the spring sunshine, they remember what it would be like if there was no war in their country. What it would be like to be at home with their loved ones...", for example, write those responsible for a Methodist facility in Vojnuv Mestec (Czechia), where refugee families are housed, about their observations.

The leaders and helpers of the UMC continue their work with and for refugees - in response to current needs, but also increasingly with a longer-term perspective to make the work sustainable.