Outlook for the future 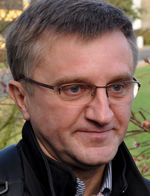 The UMC in Poland is not only at the beginning of the second century of its existence, but also had important decisions to make for the future at its Annual Conference gathering this year, held in Ełk from June 23-26, 2022.

Who will lead the UMC in Poland as the leading superintendent in the coming years? This question was on the minds of pastors and lay members even before the Annual Conference. In such election years one senses a stronger tension in dealing with each other. Different reports and topics can then be used to say what should change in the church or how good the previous leadership was.

The previous leading superintendent could be re-elected for another six-year term, or a new person could have been elected for an initial four-year term. The previous incumbent, Andrzej Malicki, received just over two-thirds of the vote. Therefore, without further discussion with the two other pastors who also received votes, Bishop Patrick Streiff confirmed that he would appoint Andrzej Malicki as the leading superintendent for the term 2023-2029. Both the bishop and Andrzej Malicki himself emphasized to the conference that the next term should bring a change to a younger generation in the governing bodies. Accordingly, a first new pastor, Dariusz Zuber, was elected to the church council already this year.

For the rest, the dominant themes at the conference were, on the one hand, the return to physical meetings in the local churches and at regional or national events and, on the other hand, the work with Ukrainian refugees. A recent example shows how closely the two can be related: many were looking forward to the large, multi-day meeting of the "Days of Renewal", which was finally to take place again after the Covid period. It usually brings together 250 to 300 people from all over the country. Immediately before the meeting of the Annual Conference came the news that the booked recreation home will remain occupied by Ukrainian refugees well into the fall and will not be available. It was not clear by the end of the gathering whether a comparable alternative could be found in the short time available. On the other hand, the big "tepee camp" for children can finally take place again after the pandemic. Many enthusiastic young people volunteer to help in the organization.

After the Annual Conference was held in the northeast of the country this year, the next meeting will be held again in the south, in Katowice, from June 1 to 4, 2023.