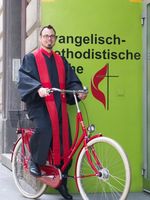 The Superintendent's report about the Austrian congregations indicated that a positive, hopeful spirit is spreading throughout the congregations in Austria. This positive spirit is somewhat remarkable, since in most congregations the financial situation is tense. Virtually all congregational budgets show a deficit, which is sometimes not covered by reserves. Stagnant revenues are not seen as a sign of declining generosity, but the affect of the declining economy has meant that members at best have not been able to increase their contributions. Conference lay speaker Helene Bindl reported on the lively exchange among the laity. In particular, she also highlighted the quality of the training series «Participating in the Proclamation». Two more students, Ruth Armeanu and Frank Moritz-Jauk, completed the training program and have been authorized by the Conference to serve as a lay preacher.
Statistician Bernhard Pöll pointed out that despite the increase in number of members, the number of worshipers attending services has been decreasing consistently since 2005, seemingly reflecting wider social trends. He noted that it would be helpful for the importance of attending weekly church services to be discussed in the congregations.
Managing Director Heinz Wieser reported on the successful implementation of the «flexible childcare» project, part of the program of the «Diakonie Zentrum Spattstrasse». Overall there is a significant increase in the work requirements, because the burdens with which children and young people come into the Spattstrasse are becoming increasingly heavy. Here it will be necessary to increase staff – a challenge in times of political pressure to decrease budgets.
The Conference Treasurer, Fritz Fux, reported that the year 2013 had been completed with a small deficit of € 2,066.76. He thanked all the congregations for having made all allocations in the promised amount. The budget for 2014, if carefully implemented, currently provides for a deficit of € 36,000. Every effort will be made to achieve as balanced a result as possible this year.
The Head of Property Management, Roland Siegrist, reported that in 2013 renovation measures were carried out to an above average extent in the church-owned properties, which was made possible by the funds accrued from the sale of real estate in St. Pölten and Ried. The closure of the bookshop BMK Wartburg was finally completed. Special thanks are due to the former managing director, through whose exceptional commitment the operation could be closed with a very positive balance! The planning work for the new construction in Linz, together with a cooperative housing complex, has been completed. More than 30 apartments are planned there.
Changes came in the Children's and Youth Work as planned: Pastor Martin Siegrist was entrusted with the task of leading the work with children. Pastor Anke Neufeldt remains head of the department.
Thanks were expressed to the members of the Commission for Public Relations for the successful new website www.emk.at. The latest news from the UMC, ecumenism and the Diakonie is published regularly on this site. In addition, there is a wide range of information about our church, as well as pages for each congregation.
The Commission for Teaching, Upbringing and Training has produced a new brochure «Marriage and Family». The text was adopted by the Conference. The brochure will be available in all congregations in a few weeks. An English translation is planned.
Small changes occurred in the area of appointments: Pastor Stefan Schröckenfuchs was appointed to serve the congregations of Vienna-Fünfhaus and Linz, assisted by Pastor Martin Siegrist in Vienna. Likewise, Pastor Esther Handschin, in addition to her present responsibilities in Salzburg, will also be responsible for the congregation in Ried im Innkreis. In early May Pastor Anke Neufeldt took a second foster child and is, therefore, on maternity leave from June through August. Until the end of the year she will then exercise her ministry in the church in Graz part time, assisted by lay preacher Frank Moritz-Jauk as pastoral staff.
The conference ended with a thank you to the host congregation in Graz, which had spared no effort to make the conference a pleasant and joyful stay for the participants. In all of the church services and social events, the significant creativity and artistic skill of the Graz congregation was visible and audible!
The next session of the Annual Conference of the United Methodist Church in Austria will be held from 28 to 31 May, 2015, in Vienna, Sechshauserstrasse 56.