On the way to the people 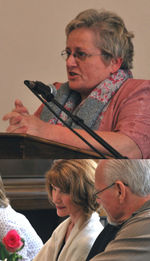 About 60 lay members and pastors participated in this year’s Annual Conference of the UMC in the Czech Republic and in Slovakia, which took place from May 30 to June 1, 2014, at Prague 2 UMC (Ječná street).

The gathering was opened by a worship service with Holy Communion. Since the United Methodist congregations in the Czech Republic and in Slovakia are part of two broadly autonomous Districts, there were not many reports to discuss. Only the two Superintendents, Pavel Procházka (SK) and Petr Procházka (CZ), read their personal report each.

In the meeting of the lay members, the newly translated liturgy for the Czech Republic caused a lively discussion. Its grade of binding nature was particularly controversial. Finally it was decided to start working with this liturgy in order to have an opportunity to gather experiences and to discuss them with others afterwards.
A second priority was the invitation to join educational courses for lay people. Six persons had successfully completed the first course and were recognized as new lay preachers. An additional Conference study course was established for those who would like to become local pastors. The report from the clergy meeting revealed how crucial the commitment of lay people is. There are not enough ordained pastors, and particularly in Slovakia the young generation is missing.

Having served as a hospital chaplain during the past years, Pastor Alena Procházková went into retirement. The Conference members expressed their gratitude and appreciation for her longstanding and faithful service. The US couple Michelle McKinnon-Young und Gary Young returned to the USA. They had been commissioned to establish an English-speaking congregation in Prague. The Conference members expressed warm thanks for their three years of committed service. Rev. McKinnon-Young was grateful for the good time they could experience in the Czech capital. They had discovered that the English language opened doors to many people – to expats, but also to Czech citizens who would like to use their English skills. After the summer holidays a couple with two small children – again from the Holston Conference in the USA – will come to carry on this ministry.

«Mission – on the way to the people» was the focus on Saturday. In his lecture, the former Superintendent Josef Červeňák shared some basic aspects of a Methodist understanding of mission:

The lecture was followed by reports on some examples how these aspects are implemented. In Tachov (CZ) the church building also serves as a tearoom, which is open on a daily basis. Thanks to this ministry, Tachov UMC reaches out to 400 people weekly.
Ľuboš Tagaj talked about the ministry with Roma in Slovakia. This ministry needs to be very practical and the love needs to take visible and helpful shape. Emotional and lively music is an attractive vehicle, and people get enthusiastic about street evangelism.
Other examples that were mentioned: the ministry with sick, drug addicts, prisoners, homeless people, young people at risk for addiction, mothers and children, etc.

The closing service on Sunday was attended by members and friends of Prague 2 UMC and by many guests. Bishop Patrick Streiff preached on Eph 3:14-21: to be rooted in love, to experience the abundance of God’s love – and to share it with others. After the announcement of the new appointments, all those who were once again sent «to be on the way to the people» received a certificate, which stated their ministry for the new conference year.