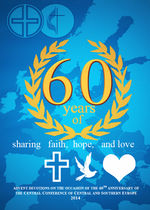 Last year a number of men and women of the UMC in East Central Europe and in the Balkans had prepared a brochure with Advent meditations. Because of the positive feedback and on the occasion of this year’s anniversary «60 years of Central Conference of Central and Southern Europe of the UMC», it was decided to publish another brochure with meditations for the upcoming Advent season.

Unlike 2013, when «only» Poland, the Czech Republic, Slovakia, Hungary, Serbia, Macedonia, Albania, Bulgaria, and Romania were represented in the brochure, the 2014 brochure will include the Western European and North African countries of the Central Conference of Central and Southern Europe (i.e. Austria, Switzerland, France, Algeria, Tunisia), as well. This means that the 16 female and the 23 male authors aged between 21 and 70 are living in 14 countries. Since all of them chose themselves what their meditations would be based on, they will share thoughts to biblical texts, which are of personal importance to them.

In the process of planning this brochure, it has been taken into consideration that in some countries of the Central Conference of Central and Southern Europe Christmas is celebrated according to the Julian calendar – this is the reason why there are daily meditations from the first Sunday of Advent according to the Gregorian calendar (November 30, 2014) to Christmas Eve in the Eastern Orthodox countries (January 6, 2015).

The authors of the meditations are living in different countries – but even beyond this reality, the brochure is an international achievement: the layout has been developed in Romania, translations have been done in Austria and in Switzerland, proofreading of the English version was outsourced to the USA. Additionally, the brochure is not only published in English and German, but various (partial) translations are prepared, as well (French, Hungarian, Slovak, Serbian, Macedonian, Bulgarian, Albanian).

The English version of the brochure can be downloaded from here. Those who have contributed to it hope that many people in Europe and overseas will be encouraged, enriched, and challenged by the meditations – and that, by sharing the same journey through the upcoming Advent season, there will be a growing connection between people following Jesus Christ in very different living conditions.