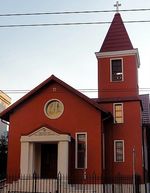 The proposed changes to the Bulgarian Religious Law, which would have drastic consequences not only for The United Methodist Church in Bulgaria, cleared a first hurdle.

On October 11, 2018, the Bulgarian Parliament passed the first reading of the proposed amendments to the Religious Law, accepting all of them without any changes. The fact that harsh criticism had been expressed from various sides – both in Bulgaria and abroad – and that these proposed changes had even been considered a violation of religious freedom, is mirrored in the official statement that was published after the first reading. It said that that the proposed changes would not be withdrawn but will be refined after consultations with representatives of the religious denominations.

Daniel Topalski, Superintendent of the UMC in Bulgaria and in Romania, has in the meantime met with the leaders of the other Protestant Churches. He has agreed with them that they would be represented by the same lawyer - a lawyer who knows the political background of the proposed changes and who is, as the secretary of the Evangelical Alliance in Bulgaria, very much aware of the particular concerns of the UMC in Bulgaria (and the Church of the Nazarene, who is in a similar situation).

Numerous talks are currently taking place at very different levels. The Evangelical Alliance will also ask for a special meeting with the Bulgarian prime minister Boyko Borisov who already met representatives from the Bulgarian Orthodox Church and the Muslim Community. The Protestant Churches are treated as the third largest religious group of the country. The Roman-Catholic Church, which is – in Bulgaria – a small minority church, would also be hit hard by the proposed amendments.

These amendments aim to stop financial support for religious communities in Bulgaria through organizations abroad. What is particularly directed against radical Islamic influences, would also have a severe impact on the UMC in Bulgaria as part of a worldwide Church. In addition, the recognition of United Methodist pastors who have completed their theological training abroad would be called into question. And finally, it would be much more difficult and complicated for the Bishop of the UMC in the Central Conference of Central and Southern Europe to execute his leadership role by visiting the UMC in Bulgaria, presiding over Bulgaria-Romania Annual Conference, preaching in local churches, etc.

According to the Bulgarian constitution, Church and State are separated. However, with the proposed changes, the State would be interfering in the running of the Church by directly paying the salaries of Orthodox priests and Muslim imams, but also by cutting the UMC in Bulgaria from the Central Conference of Central and Southern Europe and the worldwide Methodist family.

The Church leaders hope that until the second reading and a final proposal a path can be found that does not threaten the existence of the UMC in Bulgaria and many other faith communities.