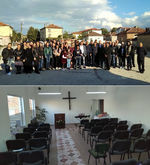 The mission work of a United Methodist Local Pastor and his wife led to the start of a new congregation in Dalgopol.

Dalgopol is a Bulgarian city of approximately 5.000 inhabitants. It is situated in the eastern part of the country, about 70km from the Black Sea city Varna. In 1998, the UMC in Bulgaria could celebrate the opening of a Turkish-speaking congregation in this city. However, this church ceased to exist some years later.

But Dimitar Gospodinov, a United Methodist Local Pastor in Trastikovo, and his wife did not give up on Dalgopol. Their faithful and committed mission work bore fruit, and over the course of time, a new group gathered in Dalgopol.

On Sunday, October 6, 2019, following the decision of the Church Council, a new local church in Dalgopol was officially established. About 60 people were present at this joyful celebration, and 22 people were welcomed as Professing Members of the UMC. The others will complete a baptismal course first and will afterwards be baptized and become members of the UMC.

The new local church gathers in rented rooms, which were renovated by the very enthusiastic local people. They also bought chairs and pay for the rent of the rooms themselves.

It is a hopeful and encouraging expression of new church development – and reason to thankfulness. This is also true for the fact that from the very beginning, people of Dalgopol did not only want to establish something for themselves but wanted to have an impact on society. One example is the involvement in the prison ministry of the UMC in Bulgaria by offering musical talents already in 2016.