A change in context does not change the aim 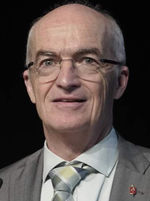 The study group in the episcopal area of Bishop Patrick Streiff met for the fourth time. It looked at the possible changes in context with the upcoming General Conference in May 2020. And it continued working on the aim that the churches in the countries of the episcopal area may find a way to stay together as closely as possible for a common journey into the future.

A dawn of hope had appeared on the horizon after the second meeting in end August. The group had offered a study paper to the church councils in each country and asked for feed-back by end January 2020.

Answers from the church councils varied
On February 7-8, the study group met for the fourth time and had a close look at the responses. Some church councils mentioned a willingness to enter a common journey in diversity. Others do not see it as possible on the background of the Traditional Plan. Already before, at a short online meeting in November 2019, the study group had heard about the possibility that the context on the level of General Conference may dramatically change.

New developments in the USA
Early in January 2020, it became public that all the leaders of interest groups in the USA, under the initiative of bishops from outside the USA, came to an agreement of “Reconciliation and Grace through separation”, according to the official title of the “Mediation Protocol”. If the Mediation Protocol will pass General Conference in May 2020, the context will dramatically change for the episcopal area of Central and Southern Europe. The diversity of convictions within the episcopal area will remain, but the default option taken by the worldwide General Conference will be much different.

The developments may probably change the process of decisions
At General Conference 2019, a “Traditional Plan” was voted with 53% majority. It strove to implement a clearly traditional view on homosexuality, introduced heavier sanctions against those who contravene, and wanted to force all those with different convictions to leave the church. Those of opposing convictions in the US made clear that they will not leave the church voluntarily, and that they will also oppose all new plans for a dissolution of the church in 2020. Under the leadership of bishops from outside the US, the different interest groups were willing to sit at a table and try to find a peaceful solution to this escalating conflict. The result of these negotiations became the “Mediation Protocol”. The protocol confirms the continuation of the church and its worldwide agencies in a “Post-UMC”, but it also offers a possibility to create a “Traditional Methodist denomination” and allows such a separation with all assets of those who want to create a new denomination. The large interest groups of traditional conviction in the US have shown their strong support for such a peaceful solution of the longstanding conflict in the church. If the “Mediation Protocol” will be accepted by General Conference 2020, the context for decisions in the central conference 2021 will have dramatically changed.

During its meeting, the study group also heard the latest report about the publication of the legislation linked to the “Mediation Protocol”. If the legislation passes at General Conference 2020, no entity in the church has to do any voting and then will remain in the “Post-UMC”. But each conference entity has a possibility to vote for joining a newly formed Methodist denomination if it wishes. The central conference would need to do it at its meeting in March 2021. For annual conferences, such votes could take place at their annual meetings in 2021 or 2022, if they choose to vote.

The task remains to search a way of staying together
The study group of the episcopal area of Central and Southern Europe, in its meeting in February, therefore looked as well at the responses from the church councils of each country that were written on the background of the “Traditional Plan”, as also at the possibility of a completely changed context after General Conference in May 2020. It continued to work on its initial mandate aiming to look for ways that as many countries and annual conferences as possible will continue their journey in the present central conference. It will report to the executive committee of the central conference that will meet in early March 2020 in Vienna. It will make proposals for next steps so that the executive committee may send out before the end of the year proposals for decisions to all delegates to the central conference in March 2021.

The study group hopes that representatives from all countries will be willing to participate in the study process leading to the central conference in March 2021. In such a process all countries should collaborate that are interested in staying together in the episcopal area of Central and Southern Europe, which in itself is an area of many diversities.