Because it is bright 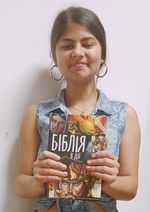 Ukrainian girl in Hungary receives a Bible in her native language

When the duration of natural illumination from direct sunlight increases, it often has a positive effect on people - a fact also pointed out by men and women of the United Methodist Church who work with internally displaced persons in Ukraine and with refugees from Ukraine now living in neighboring countries.

In a recent online meeting, Denis Kim, who had joined from Kyiv, described the situation in the Ukrainian capital as "a little better" than it was a month ago. Although sirens could be heard regularly, "people don't seem to be so depressed anymore," he said. He suspected that the warmth and sunlight were having a positive effect. And when Jana Krizova, a pastor and coordinator of work with refugees in the Czech Republic, described some aspects of the situation in her country, she echoed that assumption: "The brightness of the long days and the sunshine help people in their situation."

But this does not change the fact that the cruel war and suffering in Ukraine continue. That there is a shortage of salt in Ukraine, for example, and prices are skyrocketing. That the situation is also extremely challenging in terms of the availability and affordability of gasoline - which makes it difficult to travel to the border to pick up humanitarian aid from abroad. Or to organize the distribution of humanitarian aid within the country.

It also doesn't change the fact that whether or not to leave Ukraine is increasingly also a question of rich and poor, as Denis Kim mentioned. It is often rather poorer people who have no choice but to stay and face the current situation.

And it does not change the fact that in Ukraine's neighboring countries, especially those who have not (yet) decided to stay permanently in their host country, but still hope to return to Ukraine one day, live in a very stressful situation of uncertainty and tense waiting.

No, sunlight does not change all these circumstances. But given that the length of the day will decrease again starting today, this could serve as a reminder for those accompanying people from Ukraine. A reminder of how important it is not to tire of bringing a light of love and hope into the lives of these people. And that is what the people of the UMC continue to do in the countries that directly or indirectly border Ukraine - and in Ukraine itself. Some examples:

•     Members of the Trebon UMC (Czech Republic) have set up an integration group for Ukrainian families on their premises, which is open every weekday. The aim of this project, carried out in cooperation with the city of Trebon, is to help mothers with young children with childcare, as the kindergartens in Trebon have no free capacity. In the meantime, Czech and Ukrainian mothers and their children meet regularly on the premises of the church, and the integration group lives up to its name.

•          In Tachov (Czech Republic), the distribution of clothing in the church, in which there was no interest for several weeks, is now being resumed as the Red Cross supplies are running low.

•          A member of Jablonne UMC is helping a group of 12 Ukrainian guests to plant a vegetable garden around the church building and to partially feed themselves.

•          The UMC in Hungary continues its humanitarian aid (food donations) - both for the UMC in Ukraine and for a refugee camp near Debrecen, where more than 170 people live.

•          Kielce UMC and Pulawy UMC (Poland) have already organized several shipments of food, clothing and medical supplies to Ukraine. They are also preparing a shipment for an orphanage in Poland with children from Ukraine.

•          According to pastor Rares Calugar in Cluj-Napoca (Romania), preparations are underway for another shipment of medicines and medical equipment to a hospital in southern Ukraine - despite announcements to the contrary, the door seems to remain open for such shipments.

•          A Ukrainian psychologist continues to offer help and counseling in Cluj-Napoca in the form of group therapy. In addition to the existing group, a second is to be added soon.

•          The Romanian summer camp in 2022 will be multilingual: 30 people from Ukraine who regularly attend the services of the UMC in Romania or are part of the connections group have registered - an impressive expression of the successful integration of the Ukrainian guests into regular church activities.

•          The UMC in Slovakia continues to bring humanitarian aid (mainly food, but also other items) to Uzhgorod and Kamenica in Transcarpathia, where there are two United Methodist congregations caring for internally displaced persons. In addition, shipments are taken to a children's hospital in Mukachevo.

Although these activities often seem to be just a drop in the bucket, they mean a great deal to the people being helped - and they continue to bring light into their lives. Even if the duration of natural illumination by direct sunlight is decreasing again as of today.