Where Charity Defies the Waves of the Present 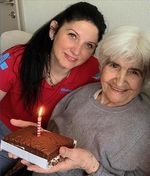 Strumica, a town in southeastern Macedonia, is far from any sea. Nevertheless, the Miss Stone Center, a social diaconal institution with close ties to The United Methodist Church, is facing big waves.

As in many other areas of Europe, the people of North Macedonia are suffering from a heat wave during these summer months. Cooling down and rain are rare - except for occasional thunderstorms with heavy rain, which repeatedly lead to flooding. But this is nothing new - "we are used to it", as Christina Cekov writes in a newsletter of the Miss Stone Center.

What is unusual, however, is the wave of inflation that has hit the people of this country, which is already facing major challenges, in recent weeks and months. Although this wave of inflation is not a regional problem, it is hitting the very people with whom the staff of the Miss Stone Center are in daily contact extremely hard. Those who were already living close to or even below the poverty line and are now confronted with sharp price increases of up to 250% for basic foodstuffs and energy face existential questions.

As a direct result of the fact that more and more people are in need of assistance, the number of daily meal recipients under the "Meals on Wheels" project has been increased from 170 to 180. The capacity of the kitchen in the Miss Stone Center was already exceeded before, which requires daily improvisation in order to be able to cook the additional meals. Despite all this, 50 more meals are cooked daily for poor and needy people in Radovis. The need is too great for this service to be discontinued.

But the Miss Stone Center itself is also struggling against the waves of the present: The massive price increases were not budgeted for, nor can they be passed on to the recipients of the meals or the other services. In addition, especially in the Home Care Project, there are repeated staff departures - and it requires the greatest efforts to recruit suitable nursing staff and to build up a fully operational team. Well-trained nursing staff is also needed in Western Europe and is constantly being poached. And because significantly higher salaries are paid there, the people in North Macedonia are all too often left behind.

At least, writes Christina Cekov, the Miss Stone Center has been spared from Covid-19 since the beginning of the pandemic. This also has to do with the fact that the employees exercise great caution in their contact with the needy and sick people and responsibly protect themselves and others.

Another branch of the diaconal work of the Miss Stone Center is the summer school for Roma children and the counseling center for Roma girls in Ohrid, about 250 km away. In the summer school, children from the age of five, who for reasons of cost are unable to attend kindergarten or preschool, are prepared for regular school during the long summer vacations or are provided with school-based support. In addition, children from the age of nine can be trained as scouts thanks to the cooperation with the scout club in Ohrid. The Roma children are particularly enthusiastic about being out in nature with games and practical lessons.

For the older girls of the counseling center in Ohrid, the responsible persons have looked for good jobs in hotels. The girls can earn a little money there during the summer vacations as chambermaids or waitresses without running the risk of being exploited. The younger girls between the ages of 11 and 15 have the opportunity to sell handicrafts through a national platform of women entrepreneurs. Far more important, however, is the fact that these entrepreneurs have held out the prospect of apprenticeships as beauticians to some of the Roma girls and have also promised to give lectures on important topics for the girls and young women at the counseling center.

In spite of all the waves, the people in charge of the various branches of the Miss Stone Center are showing great commitment and unconditional charity, thus opening up perspectives of hope in stormy times.