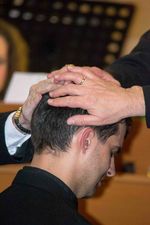 «Younger, more educated and more caring», this could be the headlines on the Hungarian Methodists after the 2011 census. At the Annual Conference, which took place from April 17-20, 2013, in Budapest-Óbuda, there was sincere thankfulness on the development of the Church. In a bold decision the takeover of a private school was approved.

The 2011 census brought bad news for the Churches as a whole. In the past 10 years the big Churches (Roman-Catholic, Reformed, Lutheran) lost about 30% of people considering themselves part of one of these Churches. On the other side, a surprising number of 2400 people claimed to be United Methodists, while the internal statistics only show 410 professing members or a constituency of about 1700 people (including children and friends). Even more surprising but reason for joy was the fact that the UMC has a higher percentage of young people (below 30), of people with higher education, and of Roma people than other traditional Churches have.

The leadership of Forrai Private School with more than 400 students (high school diploma and higher professional education) had contacted the leadership of the UMC some months ago. In Hungary there is a long tradition of schools being owned and administered by Churches and supported by the State. The leaders of Forrai School thoroughly acquainted itself with various Protestant Churches. They came to the conclusion that the UMC would fit best to the aims and values of the school. The worldwide nature of the UMC, the Social Principles and the credible and inspirational assistance for both everyday life and faith (e.g. through the Hungarian edition of «Upper Room») were particularly esteemed. The leaders of Forrai School browsed the Internet in order to read Methodist sermons, and they even visited Methodist worship services. Confident of the ministries of the Methodists they asked the UMC to assume ownership of the school. Following a thorough discussion the Annual Conference unanimously approved this bold step. At the worship service on Friday evening, not only the founding family and the school administration were present, but also more than 30 teachers.

In the same worship service two women and one man were commissioned as Local Pastors, and one man was ordained elder. Also in regard to a new generation of pastors, the UMC in Hungary is a juvenescent and dynamic Church.

The next meeting of the Annual Conference will take place from April 10-13, 2014.

Source: Office of the Bishop, Zurich/Switzerland
Date: May 2, 2013