Her path led her from the Christ Church in Vrbas (Serbia) to the Peace Church in Konstanz (Germany). She could have often despaired in the face of circumstances, but instead, even in times of great need, she trusted that God would always be near her and never leave her. On November 29, 2020, she passed away in her 99th year: Maria Schwertfeger.
The Habsburg monarchy of the 18th century pursued a strategic settlement policy in Vojvodina (in the north of present-day Serbia). German men and women were to cultivate the vast arable lands of their new homeland with the help of their agricultural and artisanal experience. This succeeded, and thanks to the fertile soil the area developed into a real granary.

In the last years of the 19th century, the «Blue Cross» (Temperance Society) began a successful work among these «Danube Swabians», which led to the foundation of several associations. By miraculous means, the members of these associations, who soon felt quite isolated, came into contact with a preacher of the then Methodist Episcopal Church stationed in Vienna. Through his activity and the tireless preaching and pastoral ministry of other men – on foot, later also by bicycle or on horseback – Methodist congregations were established in Vojvodina from 1898: in Szenttamás (today Srbobran), for example, in Neusatz (today Novi Sad) or also in Werbass (today Vrbas). Until 1904 the work was exclusively German-speaking - then it was extended to the Hungarian-speaking population as well.

The period of the First World War was a severe trial for the congregations. One preacher after another was forced to enter military service, sometimes after only a few months of church work. During this time, Oswald Bickel, a Swiss, also worked in Vrbas and the surrounding area. However, no one thought of giving up – on the contrary. In order to alleviate the war emergency, the decision was made to open an orphanage in Srbobran – a plan that was realized in 1916. After the end of the First World War, the work was reorganized, and soon it spread further. And what had been dreamed of eight years earlier became a reality in 1922: Christ Church in Vrbas was consecrated by Bishop Blake. It was also this bishop who baptized Maria Schwertfeger (at that time still Egri), born on May 15, 1922, in the Christ Church in Vrbas on May 28, 1922. Maria's mother Katharina then ran the household at the orphanage in Srbobran for eleven years after her husband Stefan had died unexpectedly at the age of only 26. Thus Maria and her sister Rosel spent their childhood and school years in this village. When Maria was able to attend a higher school and subsequently complete a commercial apprenticeship, the family moved to Novi Sad.

Then came the Second World War... After the Yugoslav multi-ethnic state had been overrun by Hitler's Germany in 1941, the «Danube Swabians» had the Serbian people against them. During this difficult time, Maria met Heinrich Schwertfeger, a young soldier from Königsberg (now Kaliningrad). After a short time, the two were married – a wartime wedding without ceremony. However, their journey together was a short one – soon Maria's husband had to return to the front and fell in partisan fighting in Bosnia in 1943. And in the fall of 1944, it became clear that the ethnic Germans living in Vojvodina were threatened by the approaching Russian army. Three days before their arrival came the urgent recommendation to leave the homeland they had inhabited for almost 200 years as quickly as possible – by whatever means. There was no time for long words of farewell to their brothers and sisters in faith – rather, Maria, Rosel and their mother packed what they could carry in great haste, left their home at dawn and headed for an unknown future. In Belgrade, thanks to Maria’s German citizenship, which she received with her marriage, they were able to board a front-line holiday train that, coming from Greece, was transporting the last German wounded back home. For five days and nights the old train dragged on with many stops, repeatedly fired upon by the advancing Russian troops. Between Budapest and Vienna, their mother said to her two daughters: «Everything that is perishable, we have lost. But the most important and greatest thing, our God, is with us. He will guide us and preserve us, as He has accompanied us until now. He is and remains the Father of widows and orphans.»

In Vienna, they parted ways. Katharina Egri and Rosel traveled to Konstanz, where Katharina's sister lived. Maria went to her parents-in-law in Königsberg. But when the Russian troops came closer in 1945, she had to flee again: by truck, in overcrowded trains, by bicycle - day and night, in hunger and cold, always with the possibility of being shot at. 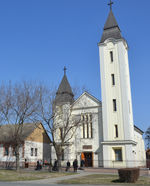 Maria finally arrived in Konstanz, completely exhausted but deeply grateful, where she met her mother and sister again. The three women were given an apartment in a run-down farmhouse outside Konstanz. The neighbors immediately closed their shutters – they feared they would have to give of what little they had to these emaciated newcomers... In the forest, the women searched for wood and pine cones, picked berries, gathered beechnuts for oil, and went to glean ears of corn or potatoes. On the kitchen table there was always the Bible and the hymnal brought from home, and when sometimes they had nothing to eat, they drew strength from singing and reading from these books. This filtered out through the open window, arousing the curiosity of the neighbors. «How can you sing when you have suffered so much misery and hardship?» Soon the neighbors also ventured into the house and sat down at the kitchen table, where often there was only flour soup. These were the first home groups - the three women simply spoke of their faith and told how God had protected and provided for them.

Because they could hardly live on the support of the social welfare office, they began to make dolls with scraps of cloth and sell them. The neighborhood children also received some for Christmas. This opened many hearts, and the three women found friends in the village community. Their greatest desire, however, was to find a community. Not only did they live in close proximity to Switzerland – since the Methodist Church in what was then Yugoslavia was part of the «Geneva Area» (and still is), and since the three women knew the bishop and several pastors from Switzerland from visits to the Annual Conferences in Vojvodina, they sought contact with them. And despite the practically impenetrable border, one day suddenly Preacher Baumann from Winterthur stood in front of the dilapidated farmhouse outside Konstanz. He would have liked to bring edibles and clothes, but that was not allowed. Only half a bottle of red wine and some rolls, which had been hollowed out and filled with butter by the preacher's wife, had crossed the border. With these, the four celebrated Holy Communion. Jesus had come tangibly into their midst and had begun a new work in and with the women in this poor place. Preacher Baumann then organized a visiting service of his colleagues from eastern Switzerland, and so Sunday services were celebrated first in the kitchen of the farmhouse, and later in the adjoining rooms of various inns with a growing number of visitors. Soon a youth group and a varied work with children were also part of the Methodist congregation in Constance. And always Maria and Rosel were driving forces. It was not simply a matter of activism for them, but their hearts were so filled with the love and goodness of God that they could not help but tell about it.

Maria Schwertfeger neither forgot the homeland she had to leave at the age of 22 nor the Methodist churches she had been part of. And she remembered well those who remained there, who had perished in unimaginably large numbers in hunger camps or had been cruelly murdered. And even though it might have seemed that the seeds of the Gospel had been sown in vain, they had only been kept and sprouted years and decades later. In Serbia, but also in Konstanz, Canada and the USA, where the refugees from Vojvodina had taken it.

The experience that the message of resurrection and life is stronger than death made Maria Schwertfeger trust unshakably in God, drove her on, gave her strength – and made her an instrument of peace. Again and again she traveled to Serbia, regularly visiting the Roma family who lived in the orphanage of Srbobran, which had been vacated after the Second World War. That at the beginning of the 21st century, also thanks to the generous support of those fled from Vrbas, the Christ Church in Vrbas could be renovated and shine in new splendor, was for her a reason to joy and gratitude - and an expression of God's great faithfulness.

She was a prayerful person and remained in regular contact with the pastors of the UMC in Serbia - to support and encourage them. In a conversation she once said that she would need only a little for herself so that she could send all the more to Serbia. She confessed: «When our Heavenly Father calls me, I will go home with joy.» Then she added with a smile: «But I also like to live a little longer so that I can support the brothers and sisters in Serbia with my pension.»

Maria Schwertfeger could have despaired – of God and of the difficult times she was going through. But in the certainty that her Savior lives, she dared to trust God again and again – and became an encouragement and a blessing for many through her great credibility.