New Law on Religion in Serbia 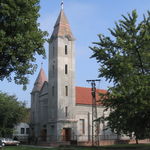 On April 27, 2006, the last day permitted by the Constitution, Serbian president Boris Tadic signed the controversial Law on Churches and Religious Communities in Belgrade/Serbia. He did this although the new law discriminates the minority churches against seven «traditional churches and religious communities» – even those present in Serbia for more than a century. He and prime minister Vojislav Kostunica urged the National Assembly to amend the law – which did not happen.

According to the new law there is on the one hand the privileged category of «traditional churches and religious communities». This category includes:

On the other hand there is the category of the «confessional communities». This category includes – among other churches – the United Methodist Church (UMC). «Confessional communities» which do not successfully apply for registration and public recognition now will remain organized as associations. This means that they won’t have a tax-exempt status anymore. But above all they would not be allowed to do start or maintain a hospital or prison ministry nor would they be allowed to offer religious education at public and private schools. Finally they would not be allowed to run schools, hospitals or homes for chilren or elderly people.

The UMC in Serbia – supported by the Conference of European Churches and the Community of Protestant Churches in Europe – had stood up against this discrimi-nation against the «traditional churches and religious communities» - without success.

Last Friday, May 19, 2006, the UMC leadership and religion minister Milan Radulovic met in Novi Sad. In a two-hour conversation the effects of the new law on the work of the UMC and questions related to a registration of the Church were discussed. The results of this conversation were encouraging: The UMC can apply for registration, and as soon as the responsible ministry of religious affairs accepts this application and includes the UMC into the official register, the Church gains the status of a legal entity and public recognition. This would mean that the UMC would be completely legally equalized with the «traditional churches and religious communities». The Church would then not only have the freedom to live a life which is turned inwards but would rather have far-reaching possibilities to serve the whole community.

After this open and constructive conversation United Methodist Superintendent Ana Palik-Kuncak hold the estimation that – because of the long and significant presence in the country and because of the documentation on the Church which was presented to religion minister Radulovic – the UMC has a good chance to be registered and publicly recognized. It can be hoped that the extensive preparations fort his step will succeed rather soon.