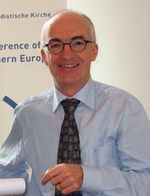 When United Methodist Bishop Patrick Streiff spoke recently to church members from Central and Southern Europe, he used the well-known story of Jesus multiplying the loaves and fishes to illustrate their own situation.

“I took that Bible story…as a very good picture for our situation as Methodists in these countries,” he explained. “We are very small in numbers, even in Switzerland, where the church is the biggest.”

The small numbers refer to both membership – about 36,000 in 14 countries – and the amount of funds available to local churches in those countries. But Streiff, who oversees the episcopal area, also is encouraged by this biblical metaphor and wonders “what Christ can make out of it (the European church) if we really let it be blessed by him.”

When delegates met March 11-15 for the denomination’s Central and Southern Europe Central Conference in Bülach, Switzerland, they re-elected Streiff, who was just completing his first four-year term, as bishop for life. East Ohio Bishop John Hopkins, who heads the denomination’s Connectional Table, represented the Council of Bishops at the meeting.

“For most delegates, it’s a time where they get to know a lot of other delegates for the first time,” Streiff said.


MISSION AND LEADERSHIP
Streiff's goal is to strengthen the mission of local churches and develop good leadership, particularly among women. “In many ways, the women are somehow leading us further among the laity,” he told United Methodist News Service during a March 25 telephone interview from his office in Zurich.

Methodist identity remains a key issue for what is “a very small church in all of these countries, in very different settings - some very secularized, others much more still in a culture which is mainly Catholic or mainly Orthodox,” the bishop pointed out.

He uses denominational resources to provide churches with some basic elements for Methodist identity. A theological working group also prepared papers for the conference, which has two official languages – German and English, the most common second languages for conference members. “Each annual conference has to do the translation into their own language,” Streiff added.

The conference is working with the denomination’s Germany Central Conference to create new congregations in Switzerland, but supporting existing churches is a larger goal. “The growth in number of churches is not as fast as it was in the ‘80s or ‘90s,” he said. “But we also realize we have in many places still quite small local churches. One focus is to strengthen these smaller churches so that they can be closer to some self-support.”

Streiff and other church leaders also want to continue to address those “really on the margins of society,” such as the Roma, an ethnic group living in central and eastern Europe. The conference has both Roma congregations and pastors. “We are looking at ways we can strengthen work among the Roma people,” he said.


EFFECTS OF ECONOMIC DOWNTURN
The global economic downturn has had varying effects upon the Central and Southern Europe Conference. “In the east central part of Europe, the former communist countries… were hit more and faster than, for example, Switzerland,” Streiff explained.

Those countries already had suffered from high inflation and high unemployment over the past few years. “In many countries, people who went to Western Europe to find work, some of them now have lost it and have to go back,” he said.

Polish workers who had flocked to jobs in Ireland and England, for example, have either lost the jobs or seen a reduced paycheck because of the devaluation of currency. “A lot of these Polish people worked in construction,” he noted. “Of course, construction is suffering heavily.”

Many European countries suffered a significant economic slowdown during the last quarter of 2008. The decline in Ireland, the BBC reported on March 26, is the largest in recent decades and the 24 percent drop for the construction industry at the end of the year was the biggest on record.

“In Switzerland, the economic crisis begins to be felt by some,” the bishop said. “What we do not yet know is how strongly and how fast it will affect the giving of the people in the pews. Most of the financial help to the eastern countries comes from Switzerland.”

A native of Switzerland, Streiff was ordained in 1984. Besides pastoring congregations in Lausanne, Neuchatel, and Biel, he led the Methodist Center for Theological Education in French, located in Lausanne, before becoming bishop.

He currently serves as chairperson on Central Conference Matters for the Connectional Table.