«To live for Christ» - Annual Conference of the UMC in Bulgaria 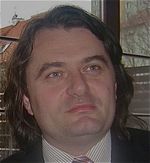 The Provisional Annual Conference in Bulgaria met from April 8 to 10, 2011, in Sofia under the theme «To live for Christ».

It was a hopeful gathering, which mirrored that a new generation is taking over the leadership of the Church. Daniel Topalski (36) was ordained Elder and appointed by Bishop Patrick Streiff as the new Superintendent. He had started his career as a lawyer and had served as legal advisor of the UMC in Bulgaria in the past. Having been a member of the Church Council for many years, he is presiding over this body since 2010. His journey towards the ordained ministry started with his service as a lay speaker, and he represented – as a lay delegate – the UMC in Bulgaria at General Conference. During his ministry as local pastor he studied theology at the Orthodox Faculty of Veliko Tarnovo and became a probationary member of the Provisional Annual Conference after having graduated from this theological school. At this year’s conference he was admitted into full membership of the Annual Conference and was ordained Elder. Besides his future ministry as Superintendent of the UMC in Bulgaria, he will still serve as pastor of the Russe charge.

Vladimir Zhelesov, who will graduate from the Orthodox Faculty in Sofia in Summer 2011, will serve as second pastor of the Russe charge and support Supt. Daniel Topalski in his ministry. Cvetan Iliev, a trainee, will start his theological studies in Fall 2011 at the same theological school in Sofia.

The statistics revealed a joyful development of the UMC in Bulgaria: The local churches are growing slowly but steadily – both in regard to professing membership and worship attendance, but also in regard to local church giving.

This year all reports of the Annual Conference had been distributed prior to the meeting. As a result the participants of the meeting had more time for conversations on important issues. Special attention was paid to a report on prison ministry in Lovech and Aksakovo.

The next meeting of the Annual Conference will take place from March 30 to April 1, 2012.

Mihail Stefanov, pastor of Shumen UMC, will serve as the new Mission Coordinator of the In Mission Together Partnership Program, succeeding Rev. Daniel Topalski.