Remembering the Faith of a Leader 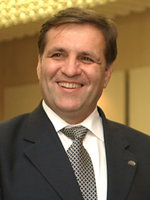 February 26 is the day of remembrance of late President Boris Trajkovski's tragic death. It is now ten years that a whole nation and many of the state leaders around the globe were shocked by the news that the presidential aircraft had crashed in the mountains of Bosnia. The President, the staff and the crew flying to Sarajevo were all killed in this accident.
2002, just two years before this happened, Boris Trajkovski had received the World Methodist Council’s Peace Award in Oslo. He had been praised – as a state president in the Balkans and a United Methodist – for his significant contribution to peace, justice and reconciliation in Macedonia and in the Balkan Region.

Boris Trajkovski was proud to be a Methodist and witnessed to his faith in Jesus, the Prince of Peace, whenever he met with his friends and also with his enemies.

February 24 to 28, 2014 the Boris Trajkovski International Foundation organized – with the assistance of the Government – an International Leadership Forum with one forum for the religious leaders and another one for state leaders and other politicians. The religions discussion forum was digging into the theme «The Faith of the Leader who serves the Nation», the political discussion forum dealt with the challenges facing the Balkan countries. In addition to the forums, a sports event for the secondary schools of Skopje, the capital city of Macedonia, as well as a forum for the young generation were organized. I was impressed how the legacy of Boris Trajkovski, the recipient of the WMC Peace Award, was celebrated.

In the Name of the World Methodist Council I could forward the greetings to the Trajkovski family and also to the participants of the forum, religious and state leaders from the region and from many countries around the globe.

In the past there were several occasions when I met Boris Trajkovski, the President of the State of Macedonia, in the VIP lounge at Zurich Airport. These short meetings were more than simply an act of friendship. The President wanted to pray with the bishop of his church for the journey and for the people he was going to meet on his official visits.

I am mentioning this witness because it tells more than many words about the faith of a leader. It reminds us that Christian leadership is based on prayer. The starting point for the agenda of a day is not the list of subjects and problems and meetings the day has in store for us. The checklist of the day is prepared and undergirded by prayer.

For many leaders, the list of the daily priority is:

We all have to learn again and again that spirituality comes first. This faith of the leader is the base for a Christian concept of values and human quality. Crucial values are: The «common good», human dignity and respect and reconciliation, which leads the pathways to peace.