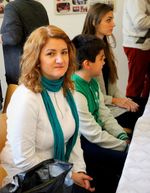 Advent is a special time in the life of the United Methodist Church in Poland. And it was even more special when on Saturday, December 6, 2014, three regional meetings took place – in Chodzież for the Western District, in Katowice for the Southern and the Central District and in Ostroda for the District of Mazury. About 220 men and women – pastors and active lay people – participated in these gatherings, which were organized as opportunities to meet, to enjoy fellowship and to encourage each other. They also offered a time to listen to the Word of God, to sing together, to tell faith stories and to share thoughts about the meaning of Advent and about waiting for the coming of Jesus Christ. The participants could also see the video, which was recorded during the «National Days of Renewal» in August 2014 in Spała. Since the United Methodist congregations in Poland are far from each other, such regional meetings are important tools to strengthen the connection and the feeling of belonging together.

A video of a song of Katowice UMC, which was performed during one of the Advent Meetings, can be found here.