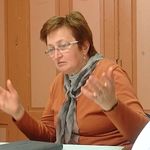 About 50 people from 12 countries participated in the meeting of the Executive Committee of the Central Conference of Central and Southern Europe and in the Theme Day, which took place from March 10-13, 2016, in Mulhouse (France).

The Central Conference of Central and Southern Europe (CC CSE) is not just an abstract idea, but it can be experienced as an encouraging and inspiring reality. This shone through many reports and conversations. When people from different countries, for instance, have thorough theological discussions – also on quite controversial issues. When cross-border encounters and events take place. When international guests will participate in this year’s summer camp of the United Methodist scouts in Switzerland. When the wish is expressed that the next Youth Meeting of CC CSE may take place as soon as possible and not in 2019 only, as it is currently planned. When a number of events for women take place, during which the participants are filled with joy and hope, and during which they are motivated to return to their respective places in order to share what they have received, learned, and discovered. When Connexio, the network for Mission and Diaconia, tries to not only support projects but to expand the cooperation with the local United Methodist congregations in East Central Europe and the Balkans so that they can, for instance, also participate in the relationships with Sister Churches in Asia, Africa, and Latin America.
In order to strengthen this network, it was decided that another brochure with devotions from all CC CSE countries will be prepared for the five weeks between the next Central Conference meeting (March 8-12, 2017 in Zurich under the theme «Jesus is Lord») and the joint Easter Sunday (April 16, 2017).

The country reports from Serbia, Austria, and Slovakia and particularly the public evening with contributions from Macedonia, Albania, Hungary, and France made visible the response of the UMC to various challenges of these days. When people longing for a better future cross the countries or wait in refugee camps to be allowed to continue their journey. When indigenous people migrate abroad because of lacking perspectives – and often realize that they do not find a future there. When people have no relationship to Christian faith anymore. The various representatives did not only present answers but also mentioned unresolved issues. One thing, however, became obvious: The UMC is in CC CSE not a mainline denomination, and the church has limited resources only. But where the church is characterized by open hearts and open doors, witness and service are of social relevance even in the challenges of these times. Or, as Superintendent Wilfried Nausner stated in a conversation on migration: «It is important that we keep our hearts warm for the neighbor.»

The central element of the Theme Day on Saturday, March 12, 2016, was the worship service. The lectures and conversations covered diversity and togetherness in the worship services as they are celebrated in the various CC CSE countries, «worship service as common prayer», the significance of liturgies, indispensable elements of a Methodist worship service, etc. The content of the lectures and the result of the conversations will impact the further activities of the Working Group on Liturgy. Possible themes will be the further exploration of various elements of a worship service and the work on a model with the «essentials», or the translation of parts of the «Book of Worship» of the worldwide United Methodist Church. While continuing the work on the various aspects of a worship service, one question should always be kept in mind: How do we – particularly in regard to this issue – succeed in reaching those people who do not or who do no longer have a relationship with a church?